Misadventure on The Rocks 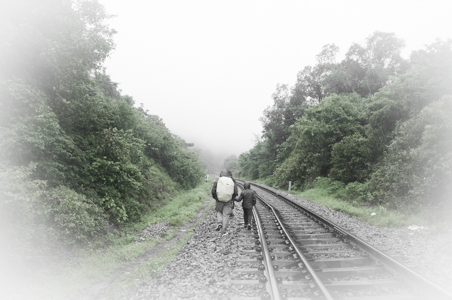 I had to switch off the torch, the sight in front of us was not what we wanted to see. It was pitch-dark. The screeching squeaking sound was unbearable. There was no end to it. We had pinned Leon to the wall, with me on one side and Paramita on the other and stood still as moving was not an option.

It was the longest tunnel in the route, 410 meters and the passing train was the longest that we have seen. At least that it what it felt. We were in the middle of the tunnel, with the ends of it not visible. A goods train with four engines in the front and three at the back was passing by with countless bogies.

On 18th July we, a team of 8 BCMTouring members from Bangalore went on a trek to Dudhsagar waterfalls in Goa – Karnataka border. Rajiv was the coordinator and leader for the trek.

The plan was to get down at Castle Rock station and walk for fourteen kilometers, till we reach Dudhsagar station and then walk for another kilometer and half to reach the waterfall.

We got down at Castle Rock station at 9:30 am. The sight on the platform was very disappointing. It was the worst nightmare we had and it came true. The platform was full to the brim with people. The disappointment became frustration when we saw police making announcement with handheld mikes that the train would not stop at Dudhsagar station and people are not allowed to get down in the waterfalls. We thought may be luck is still on our side and we can reach there by walking. After spending about 15 minutes on the platform taking pictures, we started walking.

Rain soaked morning with lush green vegetation kept our spirits high in spite of the disappointment.

We settled on the walk pretty fast and started enjoying the smell of monsoon and the sight of greenery all around. Fog was coming from the sides and covering us. A distant whistle slowly coming closer and a train revealing itself from the fog.

The pace we kept was moderate with very few breaks. The walk in itself was quite arduous, with only stones beneath our feet to walk on.There were couple of streams which had good water in them. People were thronging in big numbers and of course they started bathing under those small waterfalls, not caring much about whether they can reach Dudhsagar or not. It seemed they got what they wanted.

Rain was playing hide and seek with us. Every time we would put on our rain coat, it would stop raining.

Again after few minutes it would start, when we would have taken it off. It being monsoon, we new there were high chances of getting attacked by leaches.However I was the only unlucky person to have grabbed their attention.

After walking about two and half to three hours, we started encountering people coming back. They advised us not to go further, as Police was not allowing anyone to go till Dudhsagar falls. But we were determined to walk till the point where Police was turning people away. Paramita was in mood to reason with them, in an effort to convince them or make them see our point of view.

By 2:45 pm we reached Caranzol station, midway between Castle Rock and Dushsagar. There were people all around, sitting on the railway track. It became evident after enquring the railway staff there, that walking beyond this point does not make any sense. Police indeed is stopping people in Dudhsagar station and not letting anyone visit the waterfalls.

With heavy heart we decided to make a retreat and walk back to Castle Rock. It’s an adventure that is reserved for another day.