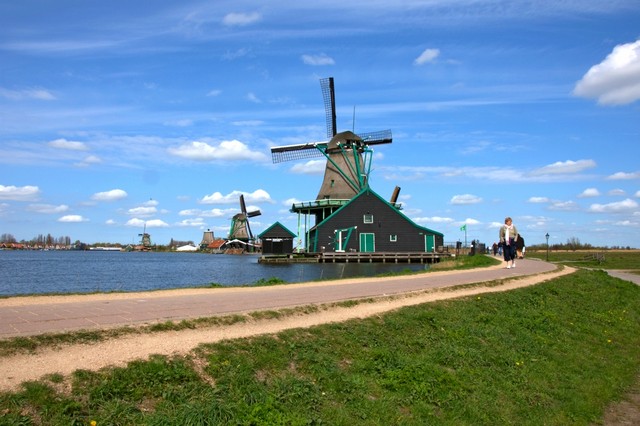 Netherlands, the typically Dutch country attracts  millions of tourists from the foreign countries every year by its beauty. In the months of April and May it  receives maximum number of  tourists for the beautiful tulips in the Keukenhof garden and the fields around that . The small fishing villages, the windmills and the wooden shoes are also typically Dutch. We visited this wonderful country in the month of April.

Our trip was from 17th to 21st April 2010. We stayed in Amsterdam and travelled to the beautiful places like Keukenhof, Zaanse Schans, Volendam and Edam.

17th April, Saturday : We had our train to Amsterdam from Hanover in the morning and reached Amsterdam central station around 11 o’clock. We had chalked out our plan roughly but needed to arrange it by day, so went to the tourist information centre just opposite to the central station. There were already many people waiting and we joined them. After an hour’s waiting we got the chance to reach the counter. We asked what we could plan for next five days and they really were not able to help much. So we just bought the round tickets for Keukenhof garden and two 24 hours transport tickets along with a city map. We asked there for the tram to our hotel and came out from there.

The starting point of the trams is just in front of the information centre and we took number 4 for our hotel. We got down at the last stop of the tram and walked to the hotel. By the time we reached hotel, half of the day was over, so after a little rest we went out to enjoy the other half.

We took the same tram to come to the city and got down at Dam Square.

We started our Amsterdam trip with Madame Tussuad’s wax museum. After a long queue in the ticket counter we entered the museum. That was the first time for us in such a museum, so it was exiting. It was so funny to pose with the celebrities and clicking photos with them. The museum was not so big but they have managed to keep many models there.

After coming out of the museum we thought to spend the evening in Vondelpark. This place is a popular public garden and people love to hang around there. It was a beautiful evening and thousands of people were seen enjoying all over. We stayed there for a couple of hours and then came back to the hotel.

18th April, Sunday : It was the day for the most important attraction of Netherlands, the Tulip garden of Keukenhof. We reached Leidseplein by tram and took the bus for Schiphol airport. Everybody on board was going to Keukenhof I think… After reaching Airport we waited for the connecting bus to Keukenhof. It was too crowded and we could not manage to get a single seat for the journey and some how stood beside the gate.

An information centre is there just in front of the main entrance of the Keukenhof garden. We got the garden map from there and started walking. We found so many varieties of the flowers in every nook and corner and after a while we kept the guide book inside the bag and walked wherever we liked.

There was also a boat ride from the garden but we did not take that. That year the theme in the theme park was Russia and that was fantastic. We roamed aimlessly for hours until our legs denied to cooperate. We took two ice-creams and got out from the garden.

We rented two bicycles along with the baby seat from the shop outside the garden and stared our journey to explore the Tulip and Hyacinth bulb fields. We kept cycling for long a way and found beautiful fields by the road side.

We stopped in several fields and spent time with the flowers, took photos and took a round trip back to the starting point. The bus stop was just beside the entrance of the garden and we took the same way back to reach the hotel.

19th April, Monday : We wanted to see some traditional Dutch countryside in the last two days, we went to Zaanse Schans on that day. This small village has a wonderful collection of well maintained traditional Dutch windmills. We went to Amsterdam central station and asked for the ticket to the nearest station to Zaanse Schans. We took two return tickets and boarded the train. It was nearly 20 minutes journey by train. After getting down there we asked for the direction to the village. We had to walk a little long to reach the area and we could see the windmills in a row from a distance.

We started walking on the beautiful streets of the village and reached the first windmill. One can buy tickets to climb up to the roof of the windmill house but we were already impressed by the sight and did not go up. There are many windmills in a row and we passed by all of them. There was a cheese factory in that village and we went there to see how they prepare cheese. The full house was smelling cheesy and we could not resist to have some cheese sandwich.

One more Dutch traditional thing we found there was wooden shoes. We entered the wooden shoe factory and attend the show where they show the visitors, the making of a pair of shoe from a piece of wood. That was an interesting show. The tourists enjoyed walking with those shoes and bought them as well.

We also bought a small pair of wooden shoe from there. We came back to Amsterdam central after that wonderful experience of Zaanse Schans.

We had enough time to see some more interesting things, so we went to the Rijksmuseum. This is a national museum in Amsterdam and has a good golden collection of  paintings. We used our Amsterdam card there for the first time. We completed seeing all the exhibits of the two stored museum and came out. It was afternoon and we were quite tired, so thought of doing something relaxing. We came back to the area near the central station and went for a nice canal boat ride. There were not many people on that boat and the driver asked everyone for their choice of language for the commentary. The ride was nice in the canals with the history of the city and no doubt relaxing. We saw the sunset from the boat and then came back to the hotel.

20th April, Tuesday : We had planned the day mainly for a visit to the dikes at the sea coast. We wanted to go to Volendam for the sight but before that we had a must see place to go in Amsterdam, the Anne Frank house, which is now a museum. Anne Frank managed to hide from the Nazis’ with her family for 2 years. During her years in hiding she wrote her diary, which was published after the end of the 2nd World War. We had read the Anne Frank diary and  were keen to see that house. The hiding places are well preserved and reminded us of the diary that we read. It made us very sad.

After that experience, we came back to the central station. We only knew the bus number for Volendam but did not know the bus stop for the bus. We searched for long and asked many bus drivers for that particular bus but still it took a long time to find. It was at the opposite end of the central station and the bus terminus there is only for the long distance routes.

While we were waiting for the bus we asked one of the passengers waiting there, about the place and he suggested to go to a place called Edam and to take a day pass which would cover both the places. We took a bus to Edam via Volendam. The journey was fantastic through the country side of the Netherlands. We got down at Volendam first. The place was a small village and can be covered on foot. We walked around the harbour area.

There were regular ferry service for nearer places like fishing village of Marken. One can taste several types of sea food there and we tasted some spicy prawns which was truly tasty. We spent some good time sitting near the dikes over the sea. We saw people boarding the ferries and some locals with their private yachts sailing on the sea. The place was amazing. We went to some souvenir shops and bought one typically traditional Dutch umbrella.

We took a bus from Volendam to Edam. The journey was of 5 km but equally beautiful as the first one. The bus went through the local streets of the small villages and it was like picture postcard scenery.

Edam was the last stop and we asked the bus driver what we could do there as tourists but we knew nothing much about that place, so we went ahead to ask some locals there. The place was so calm and we hardly saw any people. Finally got one parson to ask and he suggested to walk on the local lanes through the village and enjoy the beauty of Edam. There was no specific place to go but we surely liked the walk. After an hour or so of walking we felt tired and wanted to board the bus, so went to the bus stand again and took the bus to Amsterdam central.

That was already so late in the evening that we directly came back to the hotel for a long sleep.

21st April, Wednesday : It was the last day in Amsterdam. We only had the morning to go around the city and then the train to catch. So we thought of going to two places of our choice.

We went to the Diamond factory first. The place was just opposite to the Rijksmuseum. There is a factory in ground floor where they show the visitors the processing of diamonds from the rough stones and cutting them. And then there is also a museum where they have different exhibits to show the different stages in the life cycle of diamond, the famous diamonds, the famous diamond thefts and many other.

Next we went to the Van Gogh museum quite near from the Diamond museum. There are lots of paintings and sketches by Vincent Van Gogh, the famous 19th Century Dutch Painter and his followers. We took quite some time here were fascinated by the paintings. We were so engrossed with the paintings that we left the museum quite late. By the time we went to the hotel to get our luggage.  There was every possibility of missing our train to Hannover. Some how pushing and shoving people we reached the platform just in the nick of time.